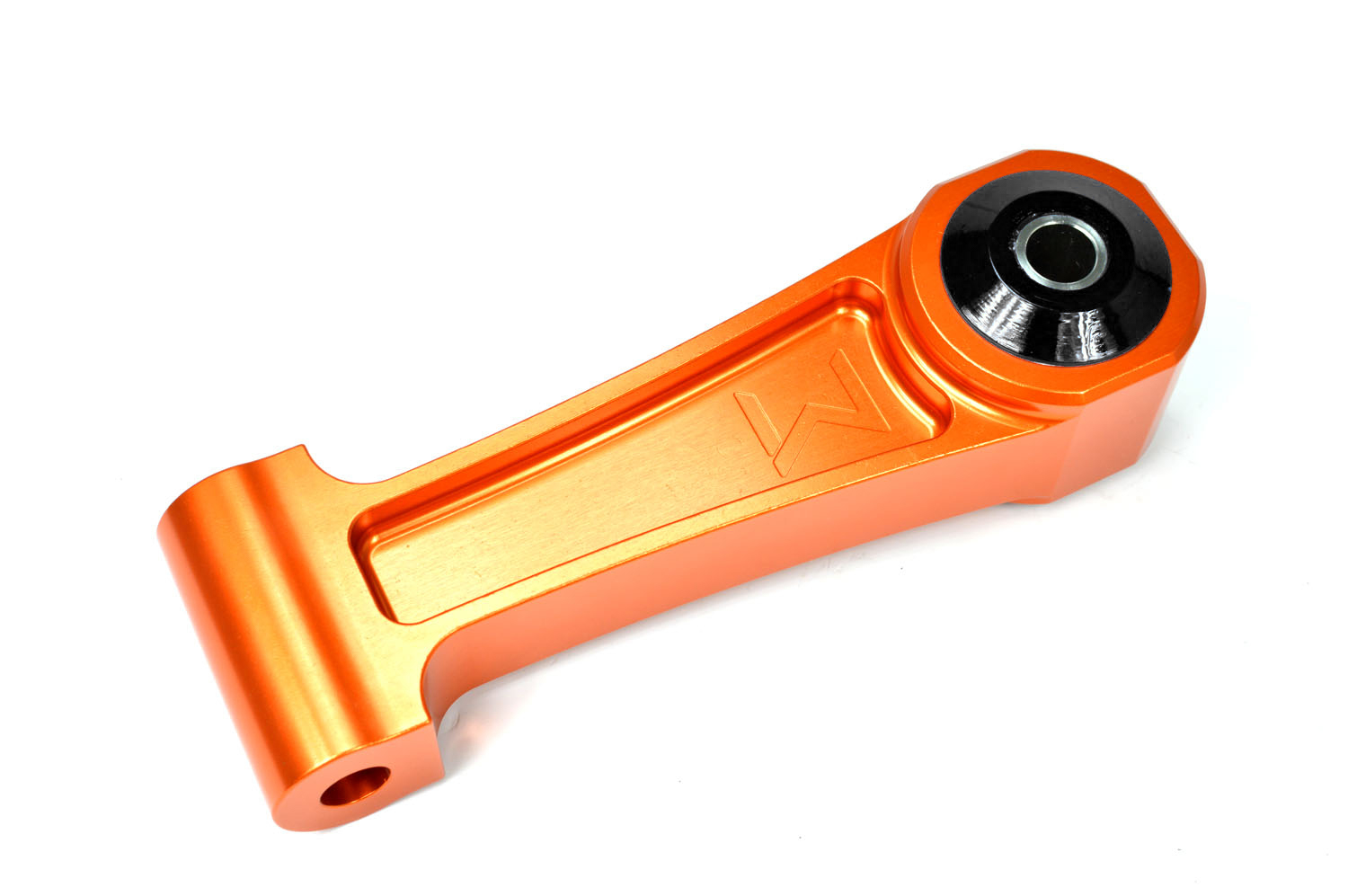 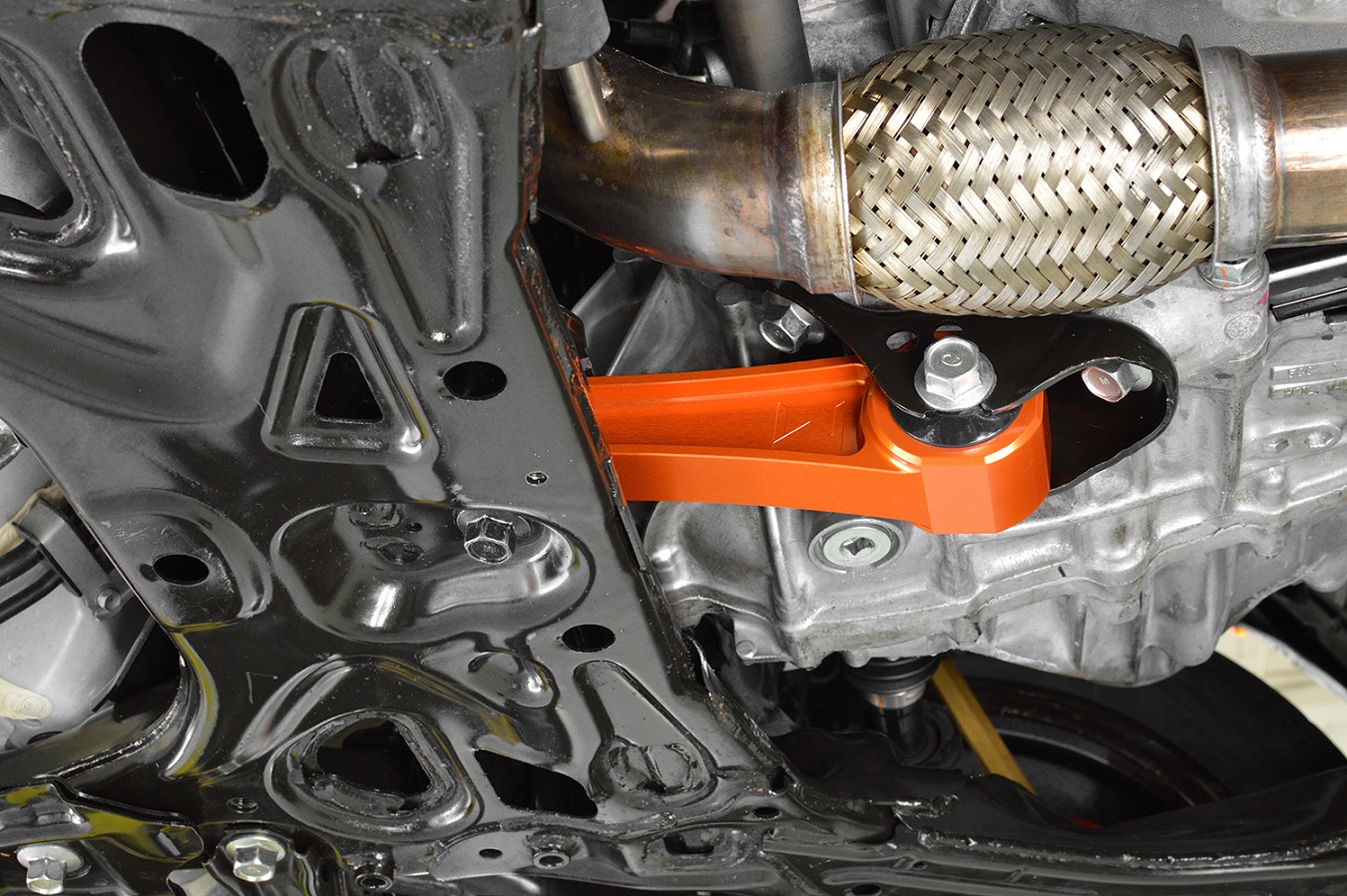 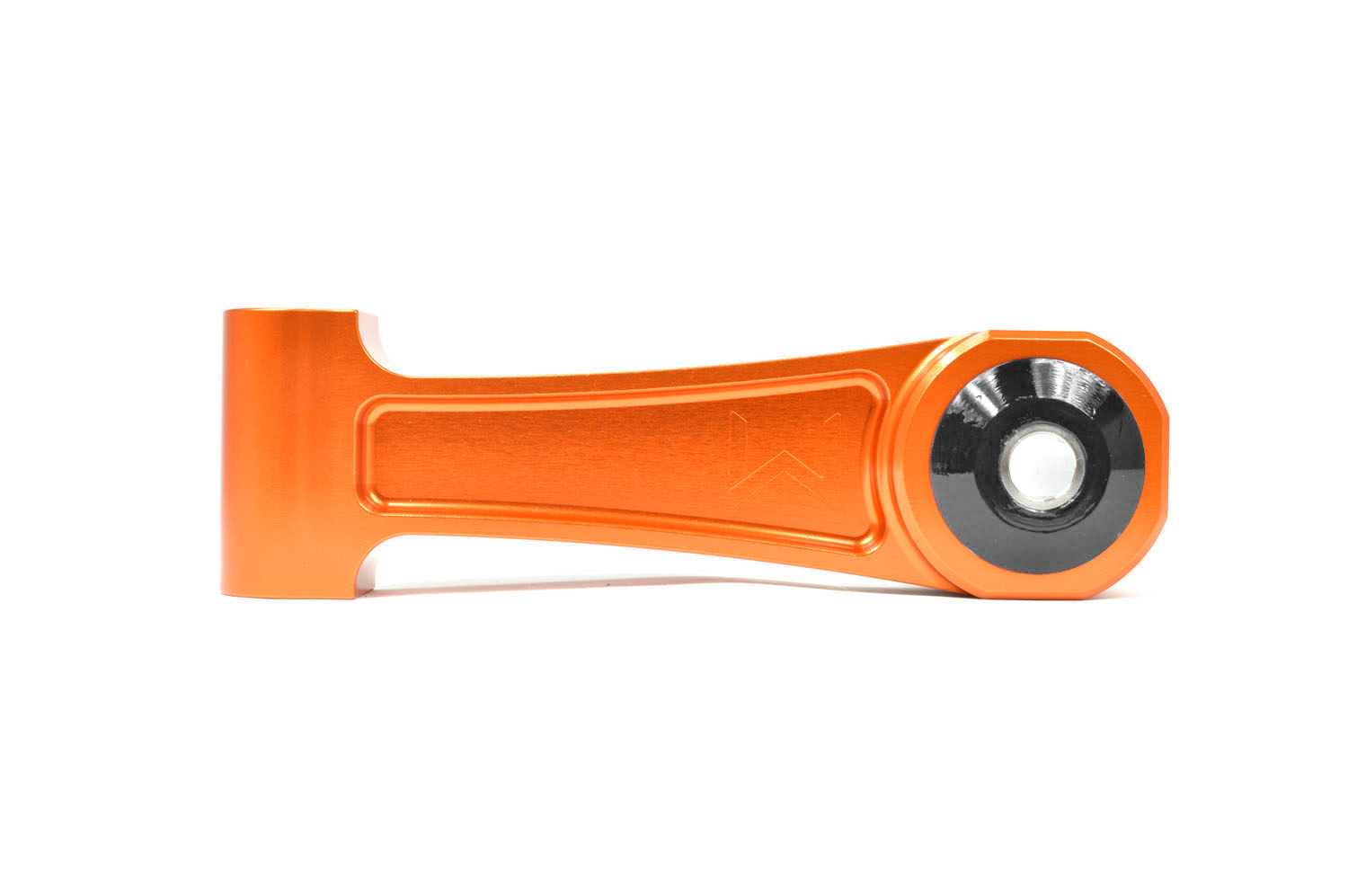 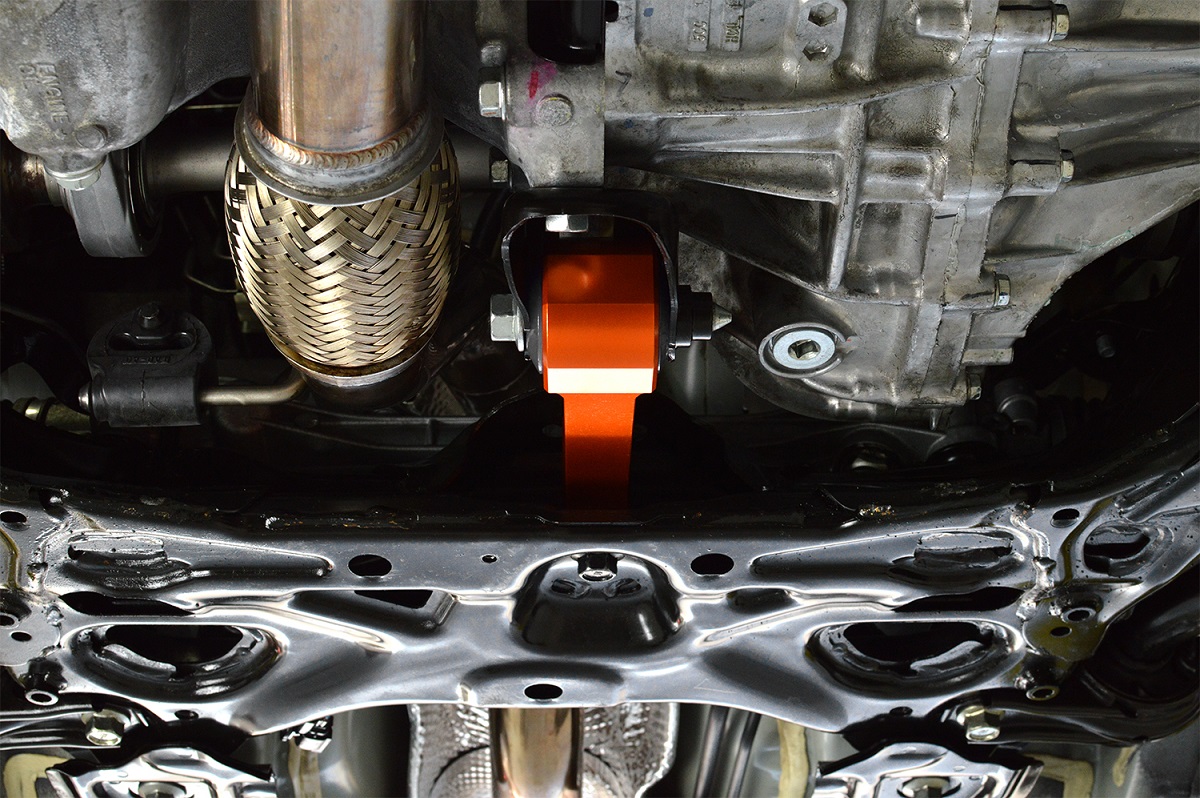 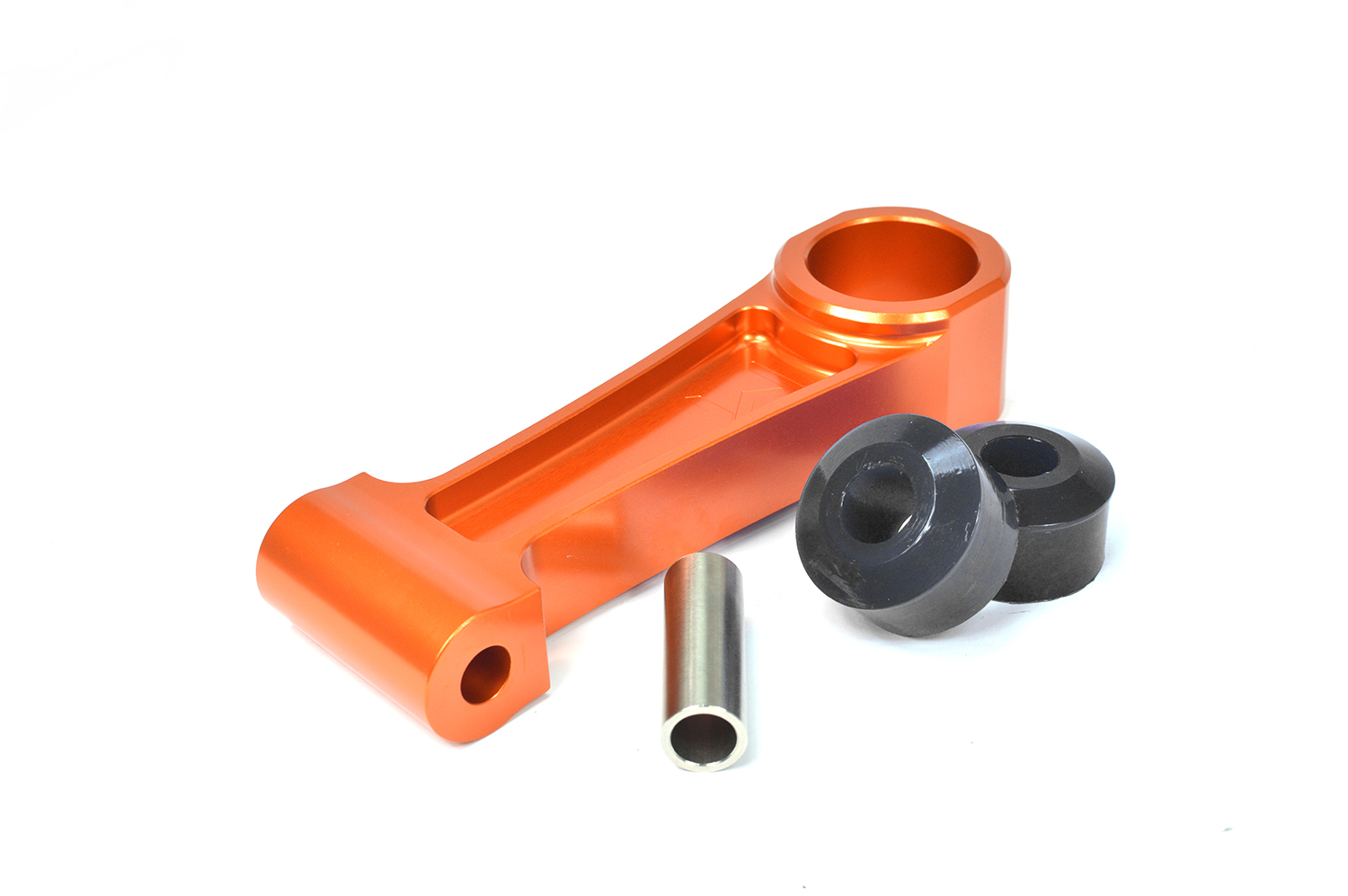 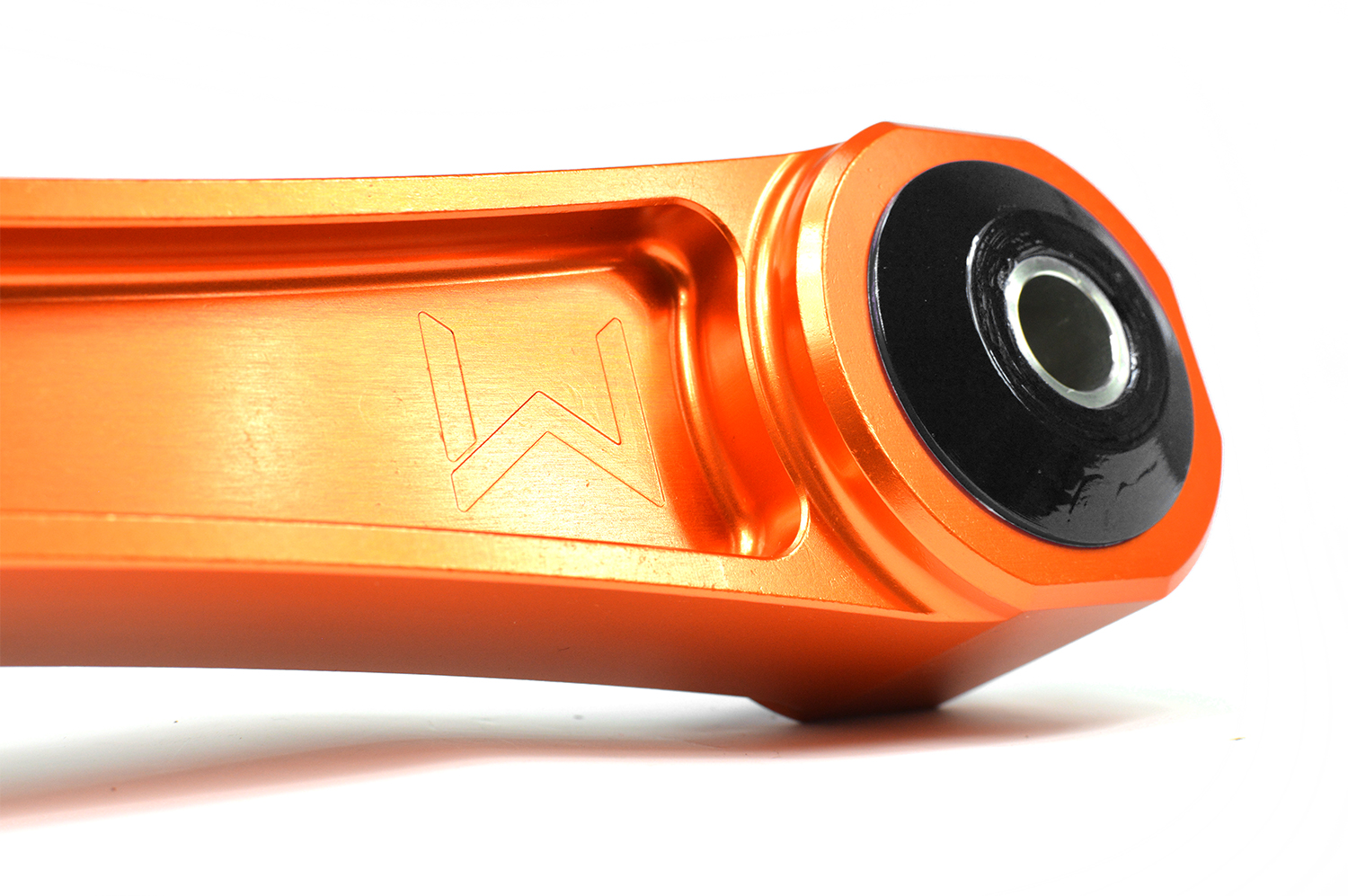 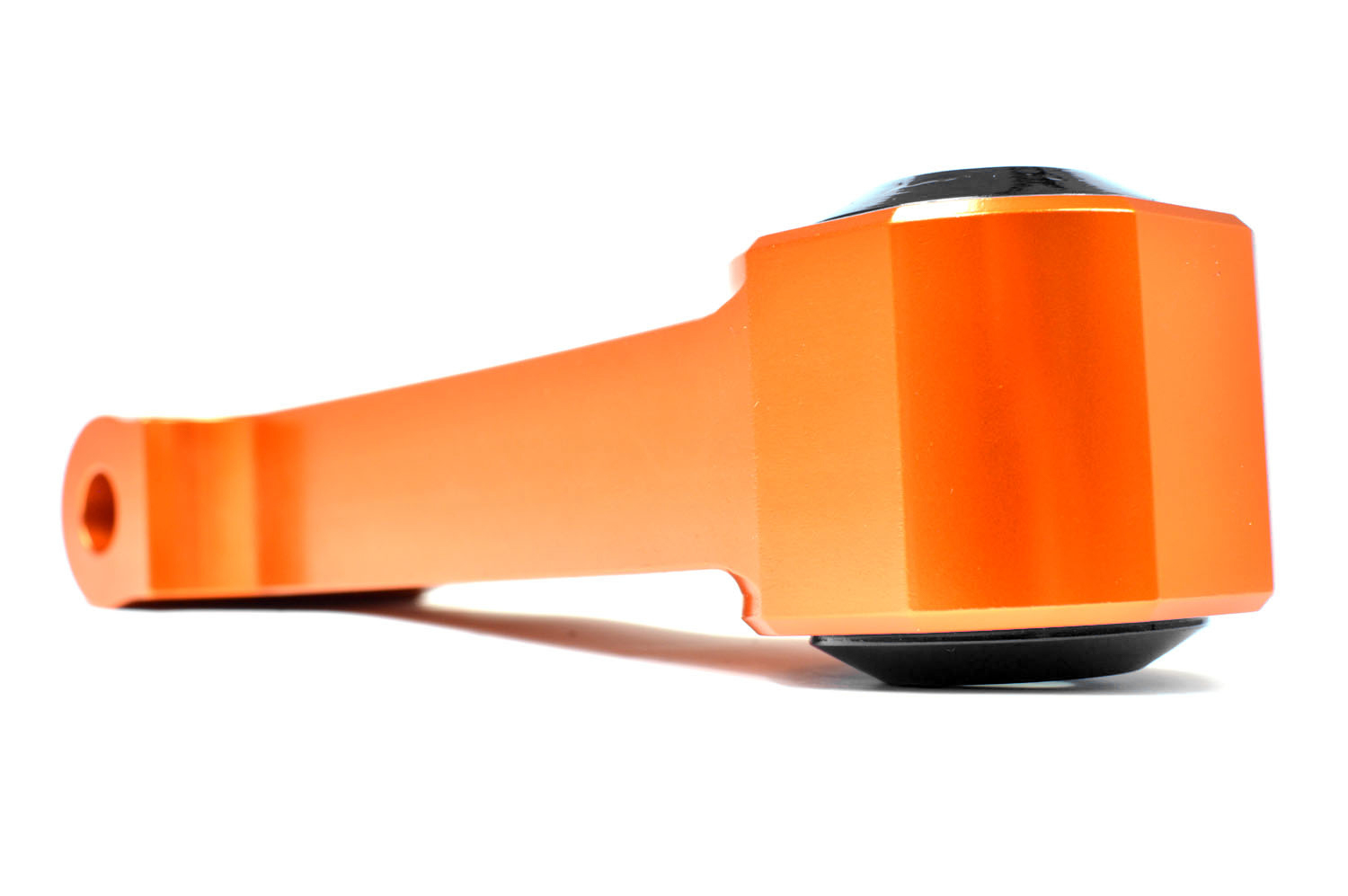 In the midst of power upgrades becoming more prevalent; it is easy to focus on horsepower and torque figures. However, your numbers don’t mean much if you can’t get the power to the ground effectively.

100% of the power your Honda Civic’s engine creates must be applied to the axles/wheels/tires to get them rolling and your Civic moving; but what holds the engine in place? The rear engine mount (along with the other two mounts) have the demanding job of keeping the engine in your Civic SI in-place. Unfortunately, the OE engine mount quickly loses effectiveness as the engine power output increases.

If you find yourself fighting for traction and would like to improve throttle response then look no further, the 27WON Performance Rear Engine Mount is the performance upgrade just for you. 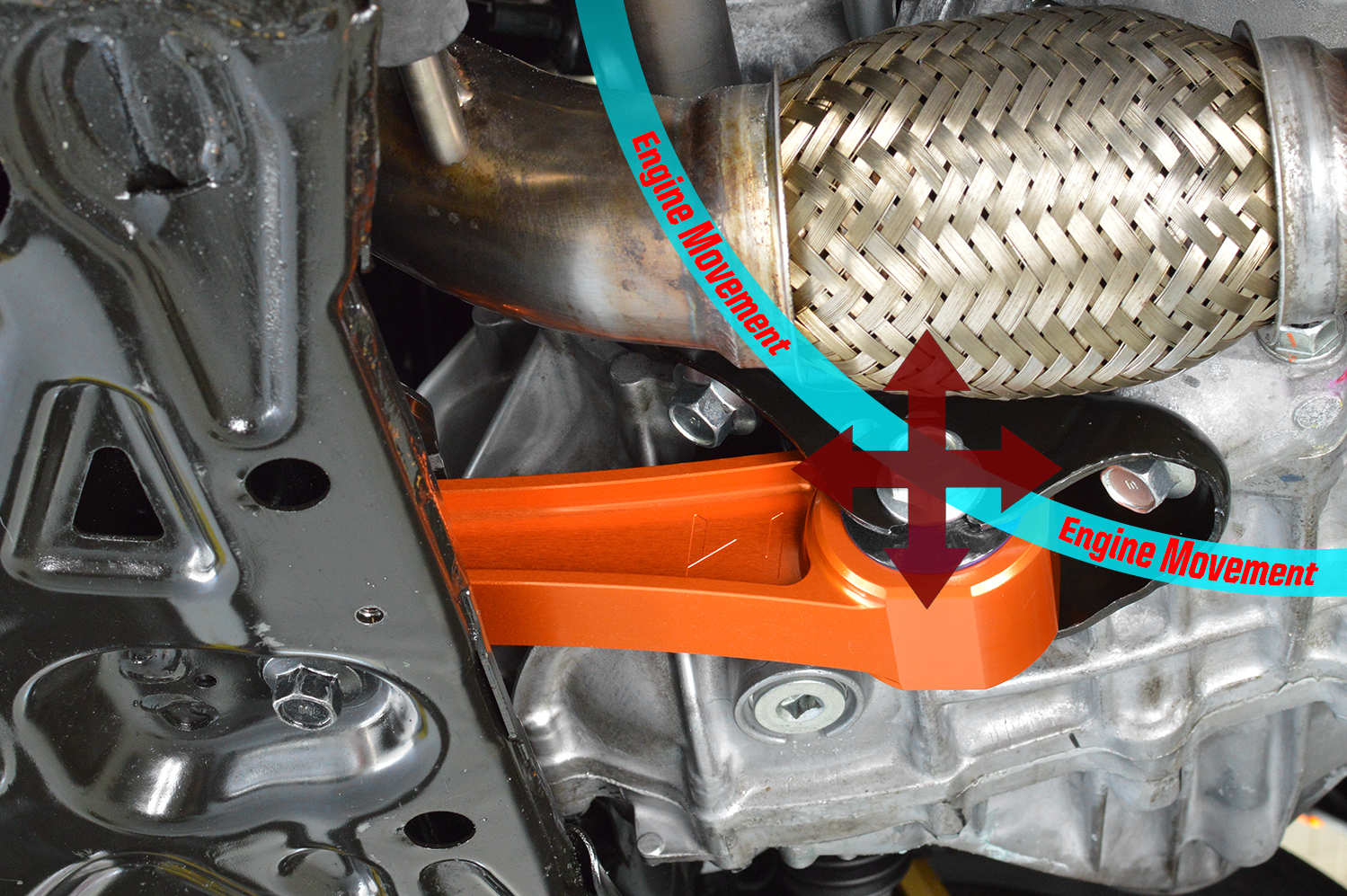 Compared to OE and other options on the market you may notice something is missing…or is it? With our design less is more; which is why our mount utilizes only one polyurethane isolated mounting point.


The mounting point between engine and RMM has a primary motion and secondary motion.


The rigid mounting point connected to the chassis sub-frame eliminates the up/down motion that the engine follows while the engine rotates. This eliminates associated secondary vibration and thus reduces NVH. Check out the blogs below for more details.

In an effort to reduce weight and maintain strength, the 27WON Performance RMM utilizes an “I-Beam” style design (very similar to high performance connecting rods) to connect the two mounting points. This design provides a reduction in weight without a significant sacrifice in tensile and compressive strength. The weight savings add up to ~1/2 lb vs OE. 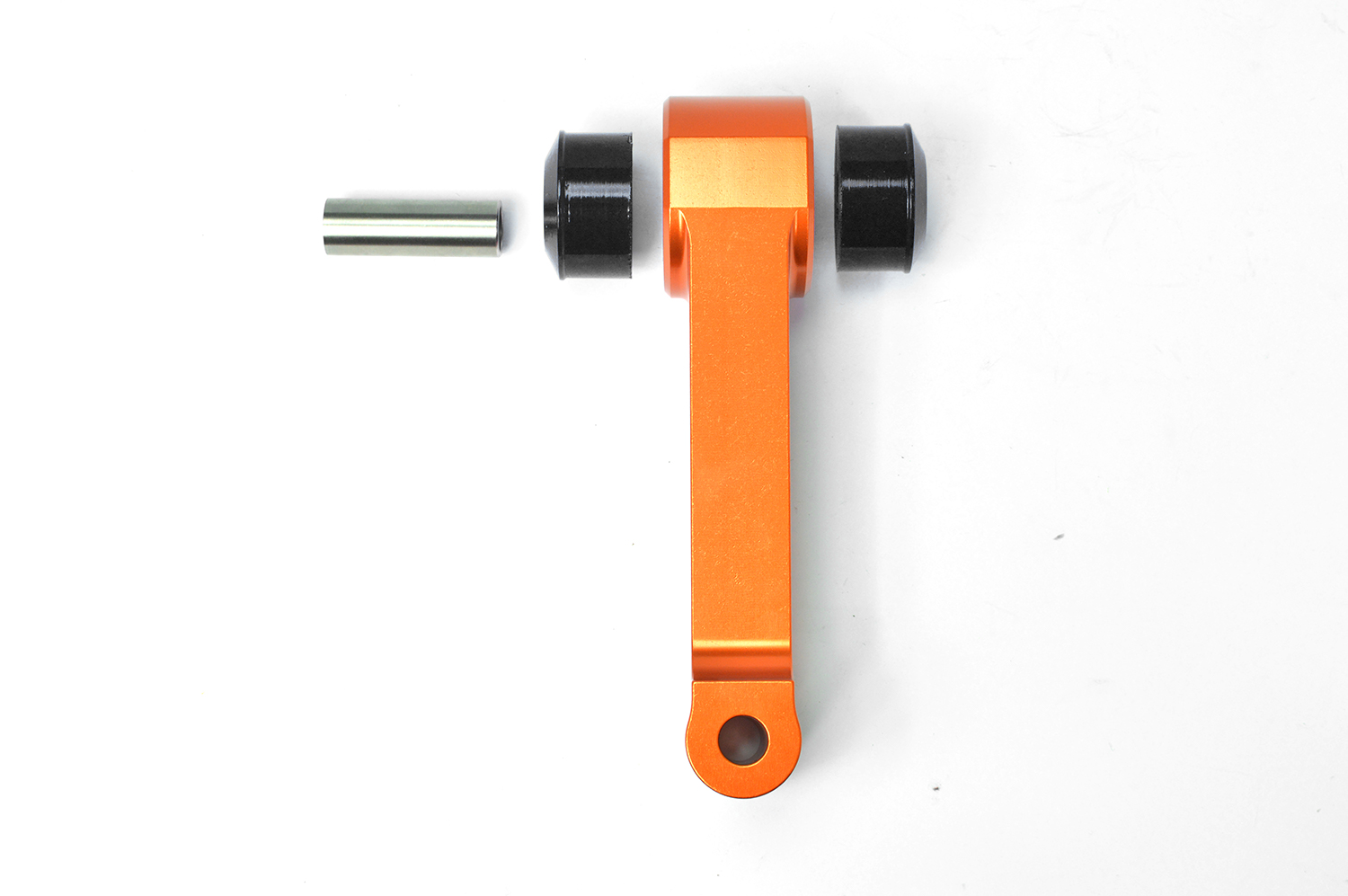 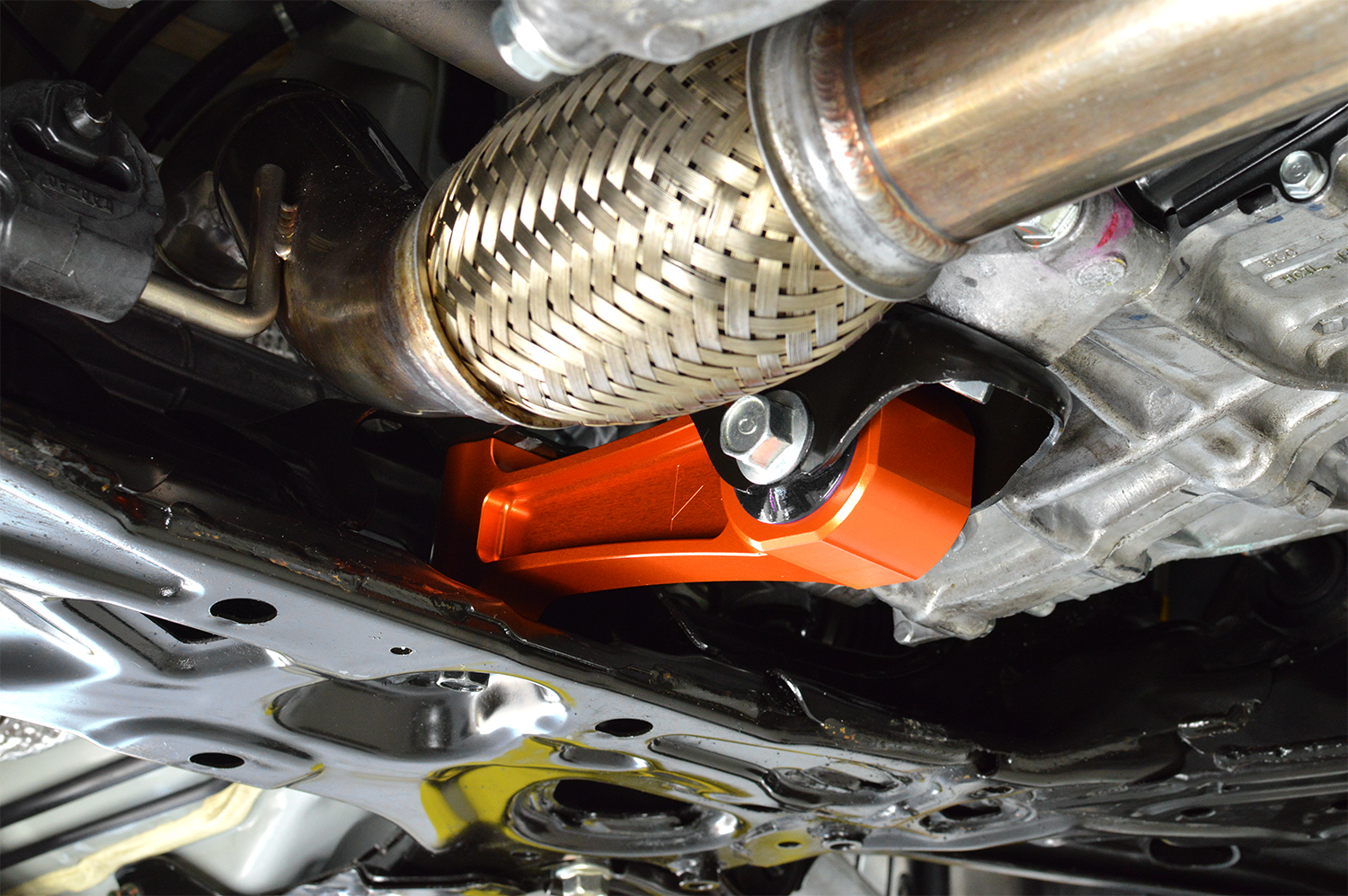 Noise, Vibration, & Harshness is an evaluation of the various irritants that can be transmitted through the vehicle into the cabin and directly to the driver and passengers. OE engineers and designers spend countless hours reducing/eliminating NVH from vehicles, however, this sometimes comes with a compromise in performance and vehicle feedback. Not all NVH is created equal, an OE designer may consider turbo noise to be unwanted NVH, whereas a performance enthusiast may consider it a desired sound.


At 27WON when designing performance parts that may affect the vehicles NVH we strive to find the right balance of performance improvement and NVH increase. Ideally, we are able to create a performance part that does not affect NVH, but that is not always the case. Examples are exhaust systems, intake system, engine mounts, suspension components…etc.


With the addition of a 27WON performance engine mount increased NVH will be an inherent part of the upgrade. While we do our absolute best to deliver a mount that works great and feels amazing some customers may find the higher levels of NVH to be too great. It is our guarantee that 100% of customers will love this mount. If for any reason you have any concerns with the mount simply reach out to us and our team will be sure to find a solution that works for you.

CHECK OUT THESE BLOGS FOR MORE ABOUT THE DESIGN OF OUR 2016+ HONDA CIVIC ENGINE MOUNT.

URF_DRMS 10/28/2020, 03:29 PM
No part has been nearly as controversial as this. My wife hates it, my son and I love it. Cool part about that, is that it's MY car, lol. I've had an RSX-S with the J's Racing Dampener in the past, so I already sort of knew what to expect. What I didn't expect was how much I was actually going to now hear the actual engine (vs. intake and exhaust sounds, of course). 10th Gen's are tweaked to the point of near-complete engine numbness as far as cabin feedback, and this essentially flips that idea on its head. As a car guy, I couldn't ask for a more bang for the buck mod. Sure, you feel the vibrations, there's no getting around it. But as other reviewers have said, give it some time, as it is like getting used to a new car. I can also advise that the more mods you have on your 10th gen, the more you will appreciate this one device giving you the ability to truly put that extra power you're making TO THE GROUND. Overall, a great, affordable mod that all car enthusiasts should have on their 10th gen. I'd leave it off your wife/GF's Civic, though, If I were you...!
Elliot Brooks 10/20/2020, 08:53 AM
If you're anything like me, you will rethink your decision the first time you start up your car after the install of this motor mount. Stay the course and let the mount get broken in and your initial concerns will go away. The initial startup has a lot of noise and vibration, but after it is broken in, it's not bad at all. There is more sound and vibration than the stock mount, but it allows you to really feel and hear what is happening with the car. I just finished a 600 mile round trip with this mount and didn't find the vibration or sound to be a deal breaker. The biggest change you will notice is how smooth shifting gears will become. To me, this is a must have upgrade if you are using a short throw shifter.
Nabil 10/02/2020, 08:30 PM
Great product very well built. Totally changes the experience driving the car, you’re a lot more connected. vibrations and noise are rough at first but give it 500 miles it’ll smoothen out.
Aaron Bent-Sim 09/22/2020, 01:52 PM
Ive had the mount on for a few hundred km and so far I'm loving it!
Install was super easy and its totally upgraded how the car shifts. I found before the mount that so many of the shifts were sloppy and jerky like they were not ever in the same place no mater how hard I tried to shift smoothly, now they are much more consistent.
Way better!
Its a little rough starting into 1st gear from a complete stop but im sure its just the break in period.
And this coupe of mine souds like a race car now! Friggin game changer of a mount! I wish I had got it earlier! As now summer is close to an end and I want to be able to enjoy it more.


Xavi Wiros 08/20/2020, 08:02 AM
Got the engine mount among some other stuff and can't find a bad thing to say. From the costumer service, to the delivery times to the product it self, not only does the job and does it good, also it's pretty and with amazing attentiont to detail (in a mod that 99% of the time no one it's gonna see)

Alex 06/11/2020, 07:13 PM
Realy a game changer... Its day and night very good quality product. Thx to the team
Alex 05/14/2020, 12:15 PM
Everything from the package, through the product itself and to the installation instruction is wonderful. The NVH is noticeable, yes. You can't miss it. But as a driver you connected to the car much better and the power you getting is consistent without any WheelHop. Really love it!
Sergio Ruiz type r ! 05/01/2020, 10:38 PM
Best best inversion ever I don’t have to say nothing just buy it omg !!
PlatinumFC3 04/03/2020, 01:00 PM
Hands down the best value upgrade I’ve done. I love the added noise and vibration—it’s just enough and now I can hear my engine talking to me!
Chandler 11/26/2019, 07:06 AM
I was hesitant on getting this because I didn't know how bad it would vibrate. Going forward I decided if i was going to get a test motor mount I was going to get the most agressive one i could find. Why? Cause Tim Allen growl. Got the beefiest one i could find and I have been wanting to try 27WON products for so long now. Installed it a couple days ago and about crapped for how much vibrations their were but honestly I love it. It sounds so nice and to get feedback from the car is absolutely fantastic I every way. Amazing product amazing staff. I hope to see this company do more amazing things in the car scene cause they absolutely deserve it. Well done all of 27WON.
Prev
1 2 3
Next
Write a review

All 2016+ Honda Civic 1.5T equipped models
Including Sport and SI models
2017+ Civic Type R
***NOTE*** NVH will increase over OEM mount, the increased levels of NVH may or may not be suitable for some customers