*Next Batch ETA is mid-Summer


Honda did a great job silencing your turbocharged 1.5L… almost too good.

At 27WON we know what you want, what your desire… an exhaust that makes a statement; and that’s exactly what we have for you. Get the details below and dare to redefine.

When we say we REDEFINE the Aftermarket, this is what we mean: The most unique performance exhaust for the Honda Civic Hatchback Sport. The 27WON design is about performance and innovation without compromise. Our unique design combines three resonator styles to create an exhaust system that growls in the curves and strip, but purrs on the drive to work and long road trips. 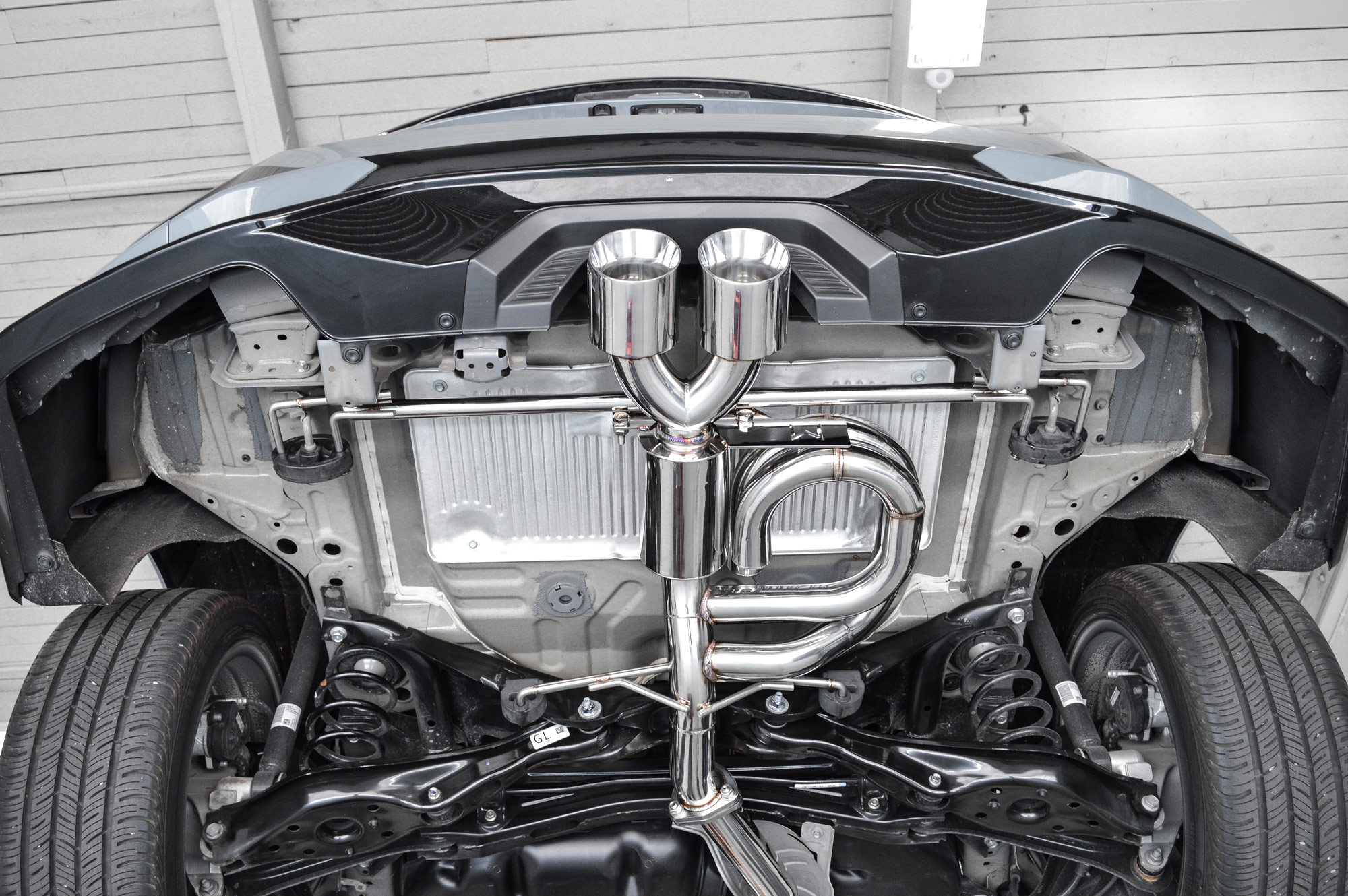 The single resonator features two design styles inside. An absorption resonator and expansion chamber resonator. These act to remove high and low frequencies and allow the exhaust gases to pass straight through.

The curved pipes adjacent have very specific jobs: to cancel unwanted drone at specific engine RPM ranges. The two pipes each affect a specific RPM range; ~3000rpm and ~4200rpm. We discovered these two areas had excessive drone that we wanted to cancel out. The side-branch resonators do not affect power or peak noise output, they only cancel specific unwanted frequencies that create awful in-cabin drone. 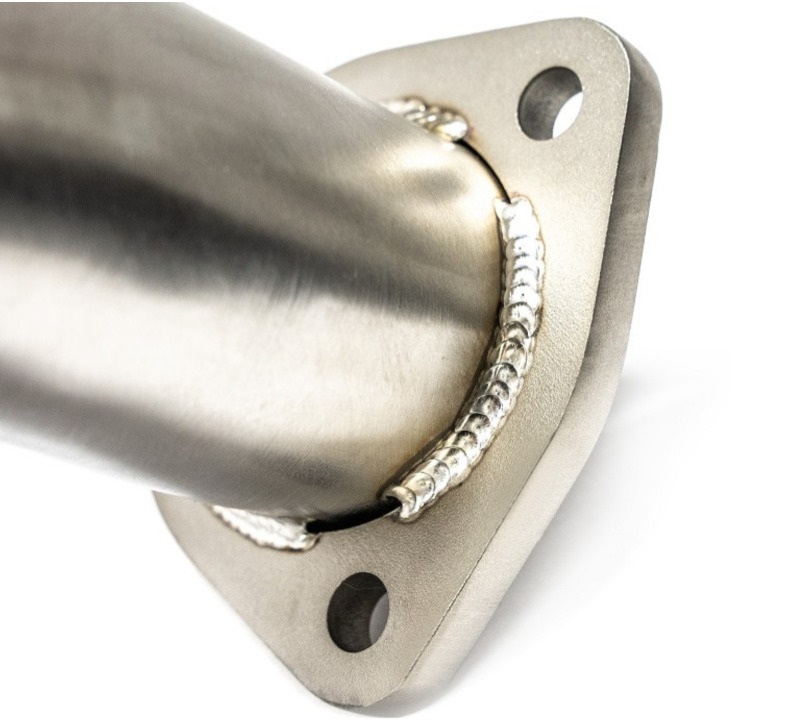 Every 27WON Exhaust System is crafted from T304 Stainless Steel tubing that is CNC mandrel bent and precision TIG welded for a long lasting and durable performance part. 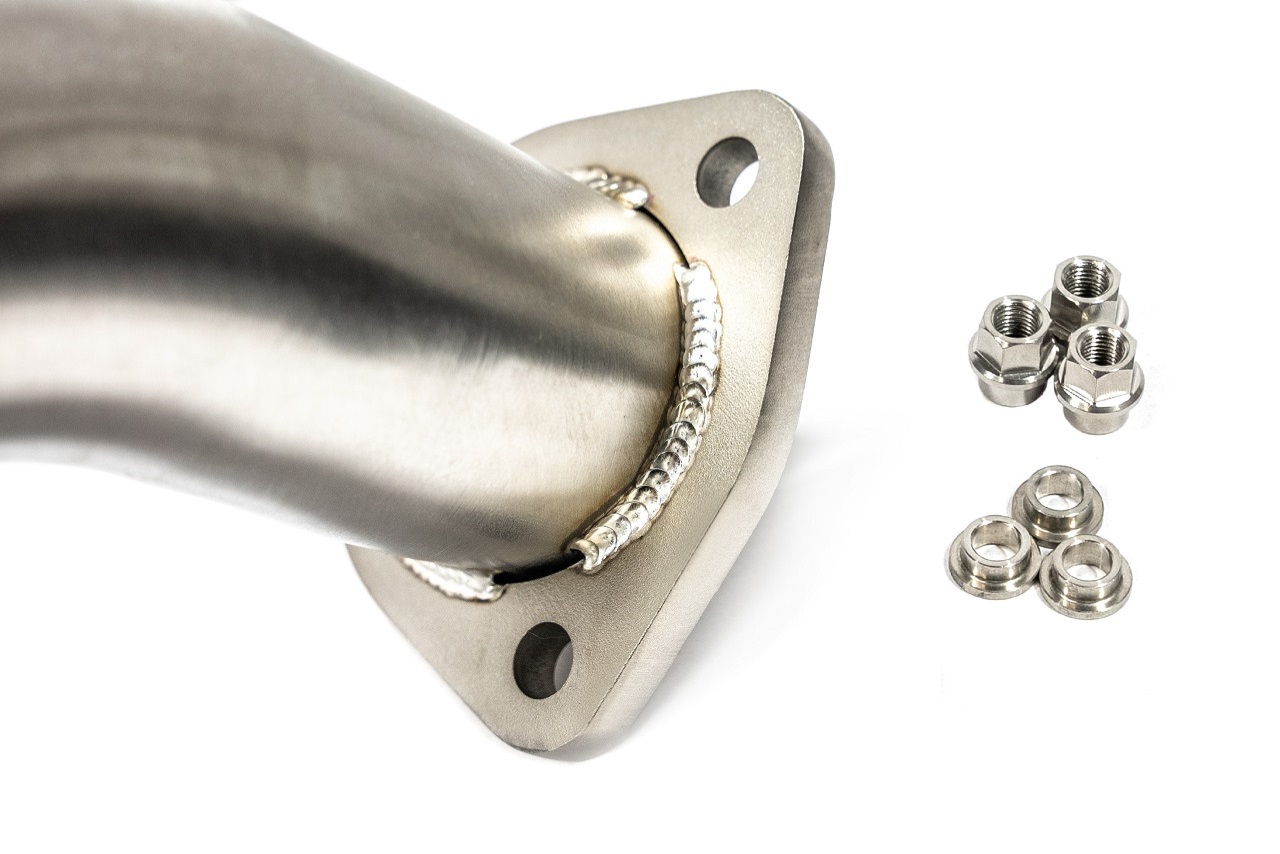 We understand that poor fitment and installation is frustrating, that’s why we have designed the 27WON Exhaust System to fit and install without issue AND does not require the modification of any OEM parts.

Specifically designed step nuts were developed for the connection to the front-pipe so you DO NOT have to hammer out the OE studs for installation. 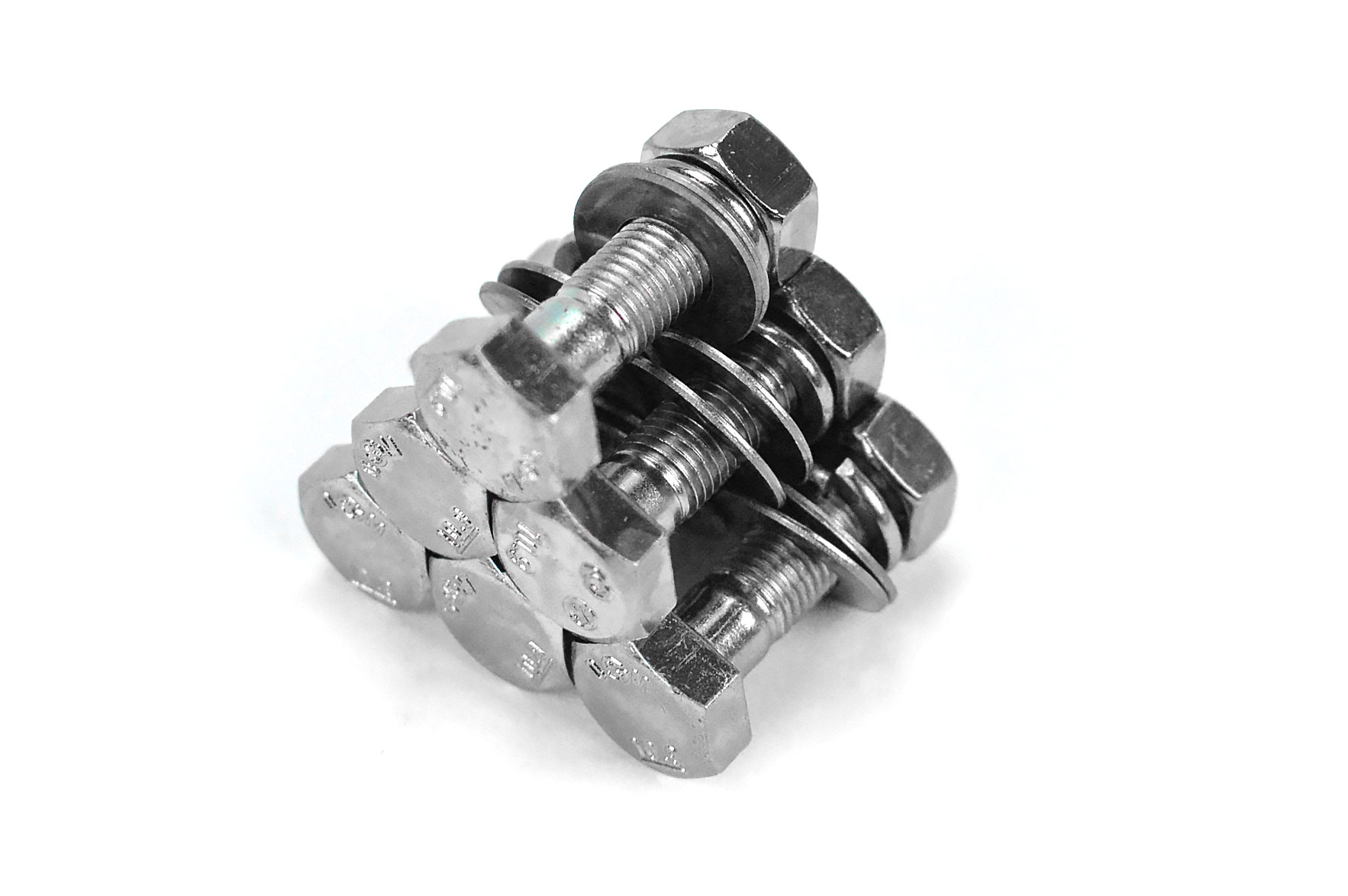 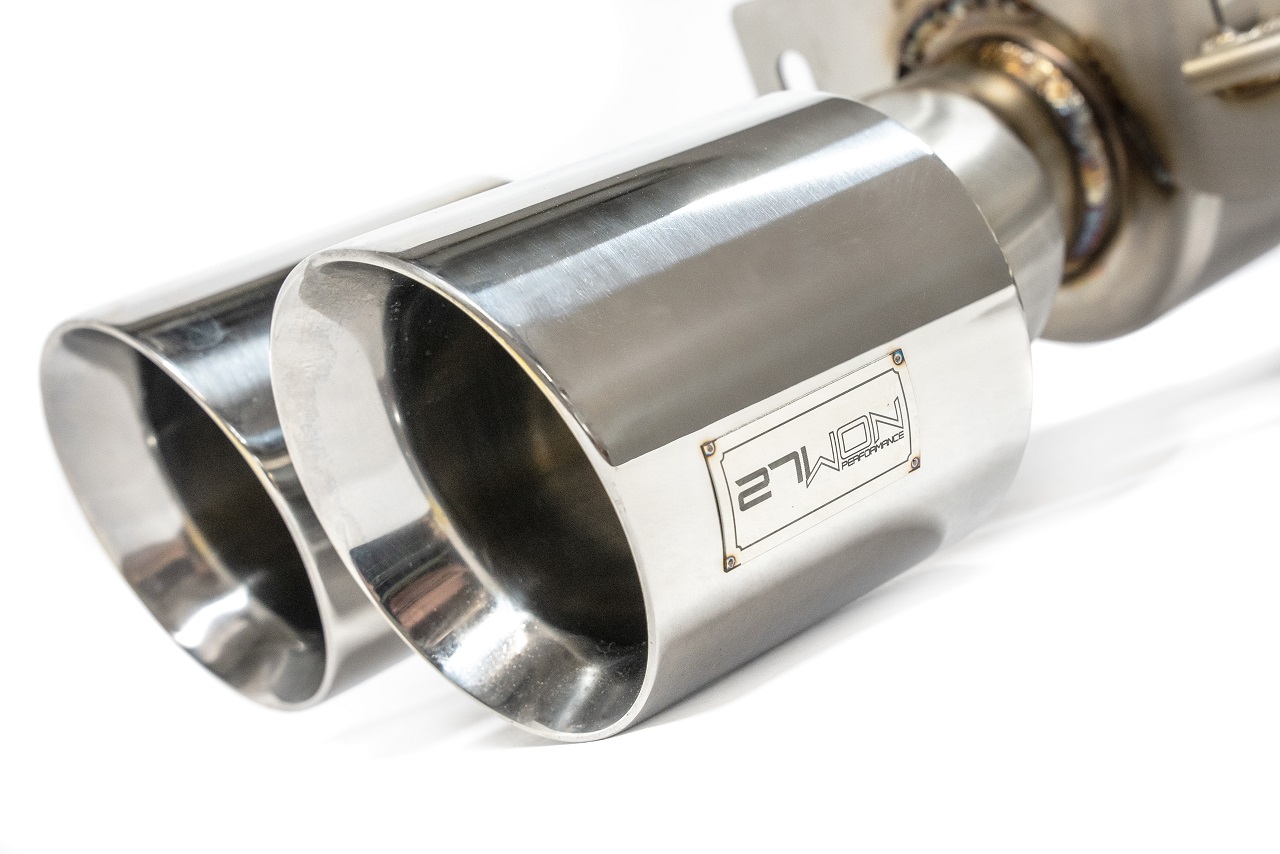 Dual 4 inch tips with a 10 degree slant cut and a double walled design top of the 27WON Exhaust System. The high gloss polish finish and unique laser engraved badges make a clear statement; this is the best you can get for your Honda. 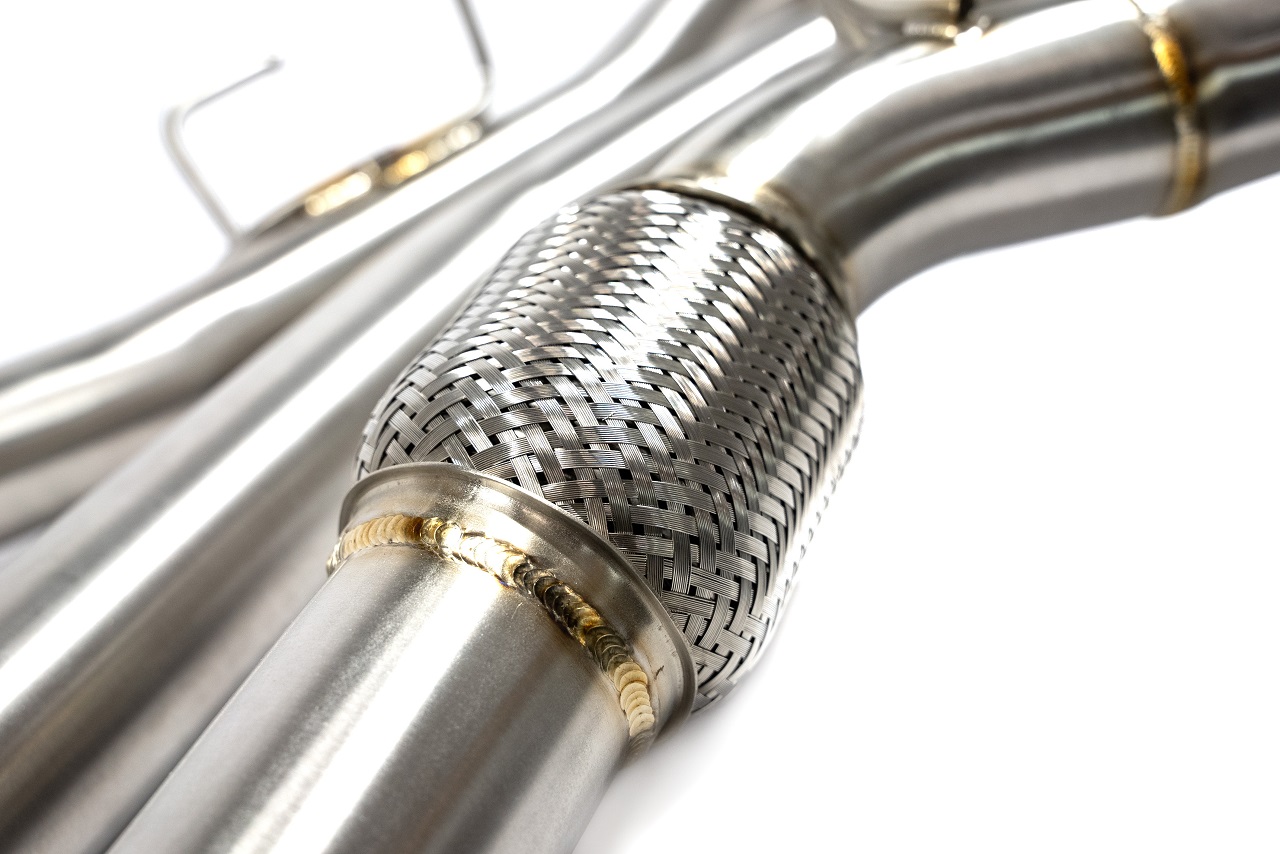 Increased flow is always the key to enhancing the performance of your engine. We increased the exhaust piping diameter from 2inch up to 2.5inch to decrease overall back-pressure and maximize exhaust flow and power. This results in 58% increase in cross-sectional area to support future power modifications and increase noise output. 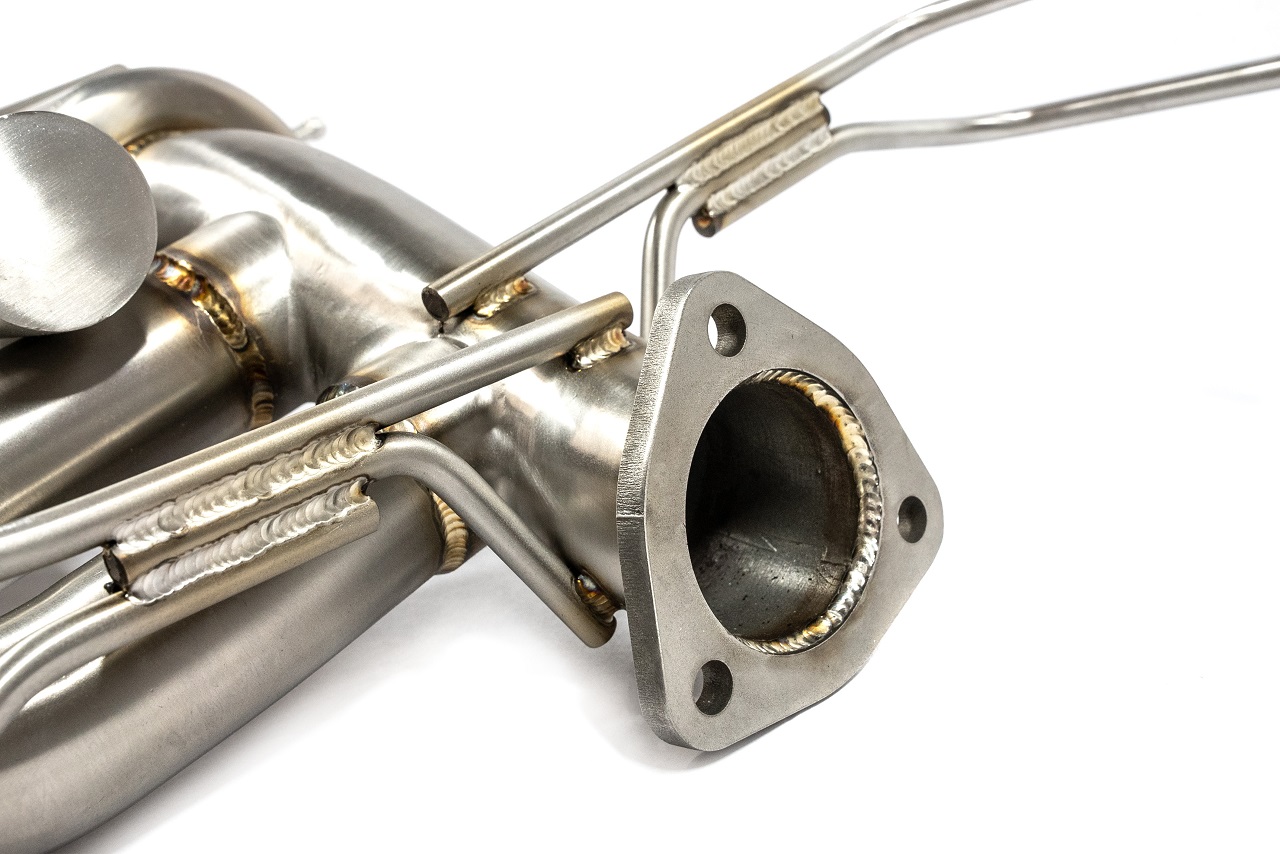 All 27WON Exhaust systems feature robust 7/16” thick 3-bolt flanges for superior sealing and perfect alignment during installation. Unlike band-clamps or traditional 2 bolt horizontal flanges, the 27WON 3-bolt flanges will not leak over time. Paired with our custom in house designed multi-layer steel gaskets and you get a long lasting worry free system.

CHECK OUT OUR TWO BLOGS DETAILING THE DESIGN OF THE 27WON PERFORMANCE EXHAUST SYSTEM: 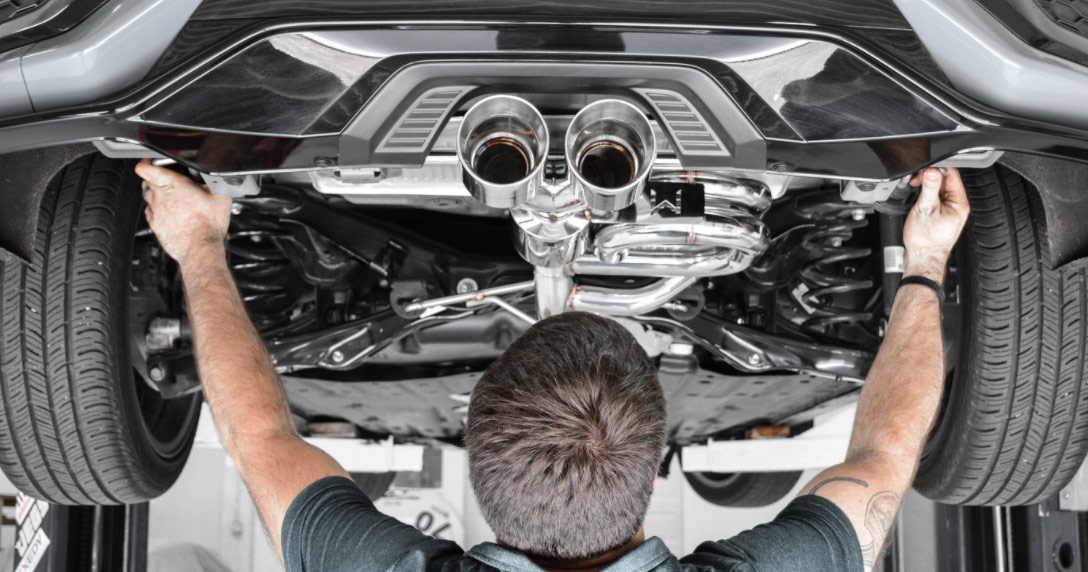 PART 1:
Dive in to Installation, Fitment, Style, and Performance.

The sound, the fitment, the look, all top notch!

Install was easy enough for me to do it by myself in a few hours, and that's with me never having done any sort of exhaust work before.

Now probably the biggest thing, the sound! I've gotten NOTHING but compliments on how this system sounds.

I currently have it with the front pipe included but stock downpipe and it gives off a sweet purr and low end grumble that's just a joy to listen to. And down in first and second gear when you're slowing down you'll even get those addicting gurgles. And just as they advertise, when you get on the gas (which trust me it'll make you want to) it'll come alive and when you're just cruising there's not much if any drone. I mostly notice any at all if I'm on the interstate doing at least 70+, even then it's not much.

They certainly hit it out of the park with this exhaust and it really made my fk7 sound like how I wanted it to. If you're even questioning about picking one up just do yourself the favor and do it!


Cameron 06/10/2021, 06:30 PM
Let’s be honest, no one likes driving a blender down the road and that is exactly what this car sounds like when it’s stock. If a Fiat Abarth can sound good then so can the FK7 and this exhaust proves it. Easy install, good support if you have an issue and man does it look good. The wait is worth it and they provided updates along the way. Get the front pipe as well because why not!
Niko C. 06/10/2021, 05:34 PM
Hi guys, let me tell you about the FK7 exhaust real quick. This exhaust is everything a car enthusiast could want for good quality, great Sound and amazing performance. The tone is deep and throaty and doesn’t sound like many other exhausts that I have seen on Honda’s. It also is obnoxiously loud but just enough to let people know that your exhaust is aftermarket. The manufacturing was spot on and looked awesome from the packaging all the way to the install. Install was easy and took less time to install the the removal of stock exhaust. My car also seems to be a hair more responsive as well since install. In my eyes this is a very good exhaust and has got 5 stars from me!!!
Phil Lim 03/27/2021, 08:27 PM
Worth the price, really glad I got this, not annoying loud, but is the perfect amount in my opinion. It fit right onto my 2021 sport hatch.
Preston 09/05/2020, 09:42 PM
Absolutely Amazing Customer Service! I installed the exhaust myself with no problems. The fitment was perfect and the look and quality of the welds are amazing as well! Living in Hawaii is always a challenge when getting things shipped here but Vincent kept in touch on all shipping updates. Thanks again to the whole 27WON team! Can't wait for the next purchase!
Matt MacNabb 08/28/2020, 01:37 PM
Hey pal,
What an absolute WEAPON of a unit! Installed this morning and MAN the sound! I've gotten so many compliments on the the tone during idle and acceleration. The guys down at the warehouse were basically drooling over it, we even had guys from the office out helping the install. Beyond happy with the kit man, and can't wait to get some more stuff from you guys. 100% pure quality and craftsmanship. The guy who owns the shop, Andrew Dowling, posted a few pictures and tagged 27Won on Facebook, let me know if you can see it! If not i'll send you a few of my pictures I took.
You, and your team are a wicked group of guys!
Thanks man
-Matt


Michael Dunning 06/10/2020, 07:15 AM
Fantastic system and super high quality. I always get loads of compliments, sounds amazing. It's a little loud with the windows up, but you can hear every pop and gurgle which is just so much fun. Purchased this as a complete set with the front pipe and catted-DP add-ons. Installed entirely by myself in a driveway using hand tools, having never done exhaust work on a car before. This is the BEST exhaust on the market for the FK7, no doubt!
Cody 06/09/2020, 12:47 PM
I’ve had this system installed for around 5k miles and I’m still as happy with it today as I was the day it was installed. Sounds great, makes a daily drive more fun and engaging. I haven’t noticed any annoying drone when highway cruising. It also gives the occasional burbles when decelerating at lower RPMs. It’s holding up very well, I’ve had no issues so far. Vincent has also displayed great customer service when it comes to updates, and checking in. Very please with what the guys at 27Won are doing.
Nick 05/07/2020, 12:12 PM
Finally decided to purchase this exhaust system after a lot of research. This was the first product I've purchased from 27WON and all I can say is I am definitely pleased. We decided to install it ourselves which was made easy by the super detailed instructions. I later had a pro exhaust shop out here in LA check out the final install to make sure everything was good and the guys at the shop were loving the exhaust system. Received many compliments and was even told the price for this set-up is fair.

So far I am enjoying this system and definitely notice an improvement when compared to the OEM exhaust. Great product - definitely recommend to those on the fence with upgrading.

Prev
1 2
Next
Write a review